Max Materials (You must have at least ONE of the material for the cheat to work.)

Please modify the incoming game to reload the archive once, otherwise, the modification will be invalid.

Save it manually before making changes, then upload or export the manually saved archive. 1. Please fill in your correct Accept Email while submitting your order information making sure delivery completed smoothly. Feel free to contact our Live Support if get any questions.
2. After you bought, we will send Assassin's Creed Odyssey Editor Cheat to your Accept Email. please download it. 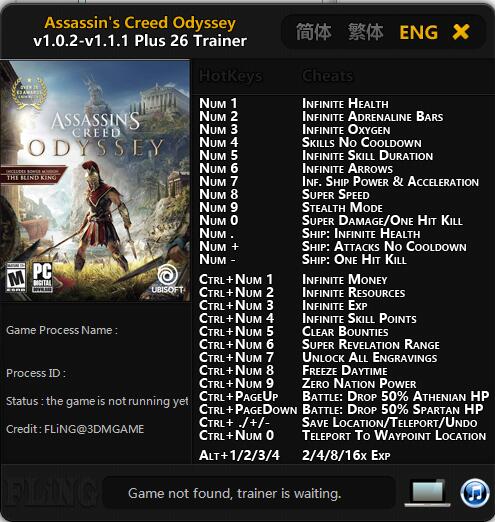 Precautions:
1. "Infinite adrenaline" takes effect when adrenaline changes; "Infinite Money" and "Unlimited Resources" take effect when the menu is opened; "Infinite Experience" takes effect when experience is gained; "Boat Unlimited Life" when the ship's health decreases Effective.
2. When the “Unlimited Duration of Skills” is activated, the duration of the skill will be locked for 1 minute, so the skill will disappear after 1 minute of cancellation.
3. “Infinite Arrow” requires more than 1 arrow to take effect.
4. Most of the enemies will not find you when the "Stealth Mode" is activated, but they will still be discovered if they actively attack the enemy. Some special enemies will be discovered if they are too close.
5. “Unlimited experience” Note that the enemy level is determined by the player level, so the higher the level, the higher the enemy level. Please think clearly and use this function again.
6. When “n-time experience” is activated, the empirical value obtained by the display will not change, but the actual added value is n times the original value.
7. “Empty Bounty” is invalid for the plot/task-triggered rewards (it will be cleared automatically as soon as the task is completed)
8. “Unlock & Upgrade All Inscriptions” is not permanently modified. Inscriptions that were not unlocked after this function is cancelled will be restored to the unlocked state.
9. When “National Force Clear” is activated, the national power of the current region will be cleared. Note that if prompted to start the conquest, but there is no trigger point on the map, you may need to switch time/transfer once/kill the local leader to trigger the trigger point.
10. "Transient to marker position" Note that the marker position cannot overlap with the original landmark/marker of the game, otherwise it will not be transmitted. Markers can be placed near it as long as they don't overlap.

Assassin's Creed Odyssey is a 2018 action role-playing video game developed by Ubisoft Quebec and published by Ubisoft. It's the eleventh big installment, and twentieth general, inside the Assassin's Creed series and the successor to 2017's Assassin's Creed Origins. Set within the year 431 BC, the plot tells a fictional history in the Peloponnesian War among Athens and Sparta. Players control a male or female mercenary who fights for each side as they try to unite their family members and uncover a malign cult.
The game was released worldwide for Microsoft Windows, PlayStation four, Xbox 1, and (in Japan only) for Nintendo Switch on October 5, 2018. It was praised for its open world, visuals, combat, story, and characters, though getting criticism for some reliance on grinding, microtransactions, and for feeling bloated.

Attributes:
SIX EPIC EPISODES - Play six one of a kind stories, every packed with new adventures and characters.
The first HIDDEN BLADE - Within the first story arc, Legacy with the Very first Blade, fight alongside the legend who initially wielded the Hidden Blade to transform the course of history.
JOURNEY TO ATLANTIS - Explore legendary ruins and uncover the mysteries in the sunken city within the second story arc, The Fate of Atlantis.
ASSASSIN'S CREED III REMASTERED - Re-experience Assassin's Creed? III and Assassin's Creed? Liberation in spectacular 4K and HDR upon its release and get a bonus mission on Day 1.